Sliders are far more comprehensive than any other product

Digital form was a no brainer. The challenge we faced was to test drive about 10 different products before settling on Kizeo. What swayed me was the sliders are far more comprehensive than any other product I test drove.

The functionality is very solid.

As the project developed and the scope became much greater I was concerned that Kizeo would fall short on functionality and force me to either look for another app – (didn’t like my chances) or get a custom app done. As it turned out , at each step of the expanding project it became obvious that the Kizeo Forms app had been there before. The functionality is very solid. For example: Having a key field to link separate forms through custom user fields.

I was worried that pulldown lists of over 2000 records would cause a problem with the phone performance. Hierarchical lists exceeded the most challenging pulldown list requirements.

Kizeo Forms delivered everything we needed

Users really needed a meaningful history screen (that was a make or break for the whole project). As I looked more into the functionality, Kizeo Forms delivered everything we needed.

There is a template for API which worked with minimal code

I started using the interface to PostgresQL. I though I would have to employ someone to write code for an API. This was not required as there is a template which worked with minimal code.

When we started using Dropbox – for data out. It was going to get complicated to manage the files in Power BI. The Kizeo Forms application has rich functionality with dynamic path and file naming options because of which we were able to fine tune the way we manage the output data.

We are also using Sharepoint. I look forward to the integration of External lists and Sharepoint lists.

The amount of coding is minimal

Overall we have been able to implement the solution rapidly as the amount of coding is minimal. 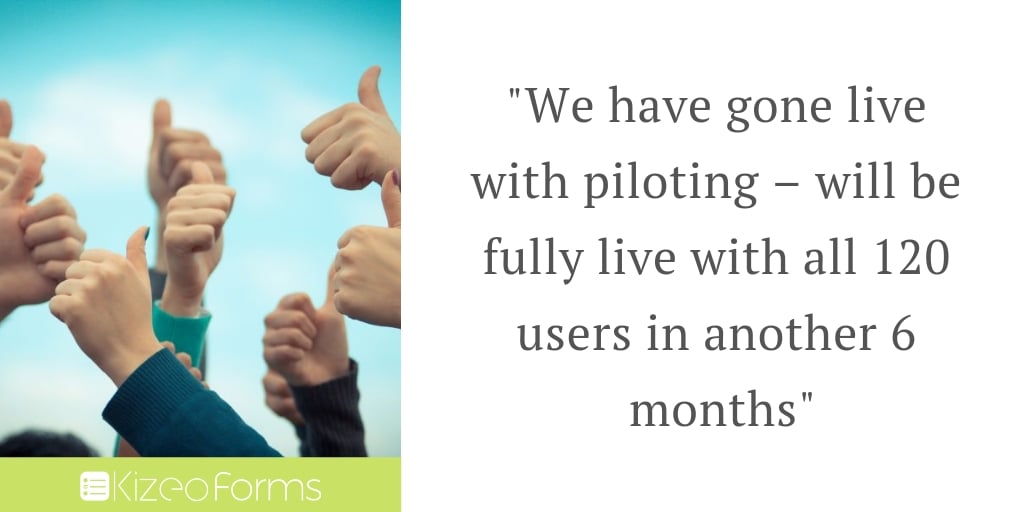 Full stack rapid development with minimum code is made possible with Kizeo Forms.

Thank you very much Bruce for sharing your thoughts!